She can’t stop, and she won’t stop! Miley Cyrus, 28, is moving her hips like, yeah! The “Midnight Sky” singer posted a sexy dancing video of herself slowly shaking those hips on her Instagram Story. She captioned the video “warm ups.” Miley’s wearing a backless black jumpsuit with silver embellishments.

Miley’s friends cheer her on as she continues to dance. One friend asks her what she’s “preparing for exactly.” Miley proceeds to take her leg and throw it up against the wall. Whatever it is, Miley’s ready!

The singer recently had her last festival performance of 2021 at the Austin City Limits festival in Texas. “Thank YOU to everyone who came to see me live & if you couldn’t make it your support from afar means EVERYTHING!” she wrote on Instagram.

“I felt the love every night & it is always my honor to perform for you! This was a show that revolved around evolution… instead of running from change embracing the fact that it is one of the only constants on earth! That & breath! Every day we’re alive we can rely on those 2 things to keep us moving forward on our own unique journey! Without those 2 important factors… it’s over. Growing up is inevitable…. Growing old is optional!”

At the festival, Miley performed alongside Megan Thee Stallion. These two totally slayed on stage together, and they couldn’t help but twerk! “ACL WEEKEND 1 was Maybbbbe just A LITTLE TOOOOO ICONIC!” Miley wrote on Instagram, posting photos and several videos. She also tagged Shawn Mendes and Billie Eilish, who were also there. 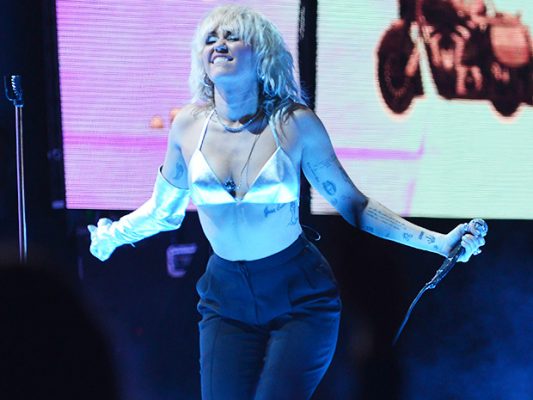 Miley has worn a number of memorable outfits over the past few months, including sequined jumpsuits, a red leotard, and that epic Hannah Montana T-shirt. She performed at various concerts throughout the summer like Lollapalooza, Summerfest, BottleRock Napa Valley, and more. As for what’s next for Miley? She’ll be slaying (and dancing) no matter what.

View all posts by